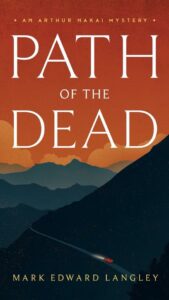 If it truly is never too late to follow a dream, author Mark Edward Langley is proof.

Langley’s first novel, “The Path of the Dead” was released on Aug. 14, after 20 years in the making and now the Middlebury resident is focusing on writing the next one in the series.

At 6:30 p.m. on Nov. 1, Langley will be visiting the Osolo Branch to talk about his journey as an author, as well as meet fans and sign books.

“There’s no overnight success,” said Langley. “You got jobs, you got life, I got married, we had kids.”

Langley has been fascinated by the American Southwest, specifically the Four Corners area of New Mexico, Arizona, Utah and Colorado, since he first visited it when he was 12.

Since then he always thought about dreaming up stories and writing novels set there, focusing on the Navajo tribe that lives in the area.

He started writing it 20 years ago, in his spare time before life got in the way. He didn’t pick it back up again until five years ago, when he was laid off from a job.

“I was out of work for eight months, so I spent mornings looking for a job and then afternoons writing,” he said.

After going back to work and then being let go again, he decided to finally end the stopping and starting and pursue his writing full-time.

“I told my wife that ‘I’m going to focus just on this,'” he said. “I finished it up, tightened it up and started submitting sample chapters to agents.”

Langley found an agent and has been working on the next books in his series, which follows a Navajo man and retired Marine, working with his friends and family to solve mysteries.

In “Path of the Dead,” Arthur Nakai, a Navajo man and retired Marine, must find his wife after she goes missing. Nakai is a skilled tracker and must use his experience to find her.

“The first book is more of a thriller, the rest of the books are contemporary mysteries,” he said.

Langley said that he traveled out to the west and spoke with Navajo people, as well as historians, botanists and more to make sure that the book and characters were authentic and that the issues and problems in the subplots were realistic.

Issues like fracking and land usage pop up in his books to connect them to the real world, he said.

“I want to bring some knowledge to people about these issues that are real and that are happening every day,” Langley said.

Overall, he is just glad that he is finally living his dream.

“This is what I’ve always wanted to do and I’m so glad I get to do it now,” Langley said.